for Veterans and the Public 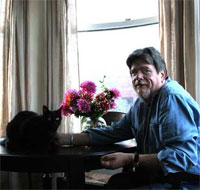 "I have been doing art of some sort most of my life. This kind of follow-through is a new adventure for me. It began rather innocently when I started playing with some digital photographs on my computer. The process reminded me of playing with crayons or finger paints as a child. I was having fun, and I got lost in the process. Inevitably, there would come a point where I would like what had become of the image I started with, and I would stop working on it and save it.

"I began experimenting with different printers and papers. The combination of a good quality ink-jet printer and watercolor paper made especially for ink-jet printing produced results quite unlike anything I had seen before. Some of the images seemed good enough to stand up to public scrutiny and perhaps even to sell, so I started building an on-line gallery and had my first public exhibition of the work in October of 2005 as part of a group show with 6 other artists in San Francisco's annual 'Open Studios.' The work was very well received with many compliments and more sales than I had expected." 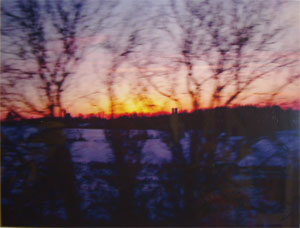 "My images begin as original digital or film photographs. Film work is converted to digital images. The digital images are manipulated with software to alter their original appearance and content. Some of the manipulations are significant and intended to produce images that have more of a painterly effect than the original photographs. Some of the manipulations are slight and meant only to improve the quality and content of the original photograph. In some cases, I will combine text with the manipulated photographic images to create a work that reaches out to the viewer on multiple levels and suggests at least one interpretation of the image.

"I really enjoy finding the intersection between the rather strict representation of an image that a photograph represents and the interpolated vision of it that many people think of as 'art.' In my own limited formal education in the arts, I was exposed to the idea that 'art' is the act of creation and that which is created is 'residue' of the creative process. So far, this notion has served best to describe how I feel about what I do and what I produce through what I do."